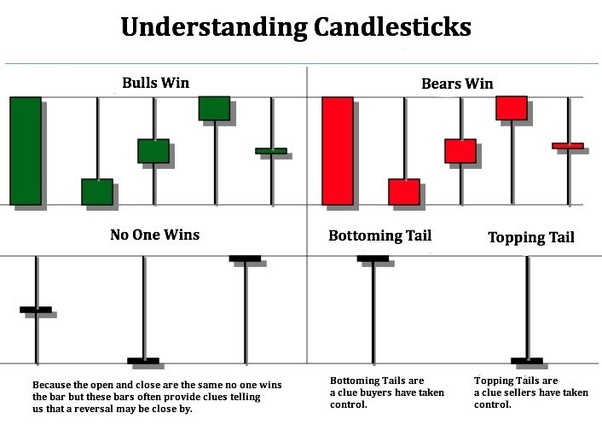 Various feudal lords deposited rice in warehouses in Osaka and would then sell or trade the coupon receipts, thus rice become the first futures market. In the 1700s legendary Japanese rice trader Homma Munehisa studied all aspects of rice trading from the fundamentals to market psychology.

His trading techniques and principles eventually evolved into the candlestick methodology which was then used by Japanese technical analysts when the Japanese stock market began in the 1870s. The method was picked up by famed market technician Charles Dow around 1900 and remains arguably the most popular form of technical analysis chart in use by today’s traders of financial instruments.

• Why use Candlestick Charts?

Candlestick charts show the same information as bar charts but in a graphical format that provides a more detailed and accurate representation of price action.

Candlestick charts visually display the supply and demand situation by showing who is winning the battle between the bulls and the bears.

Candlestick charts reveal another dimension of the given period’s price action by pictorially displaying the force (or lack of force) behind each price bar’s movement.

Candlestick charts offer everything bar charts do and more, using them is a win-win situation because you can use all the trading signals normally used on bar charts with the added clarity and additional signals generated by candlesticks.

Candlesticks charts are more fun to look at.

• The Anatomy of a Candle

Candlesticks have a central portion that displays the price distance between the open and the close.

This area is known as the real body or simply the body.

The price distance between the open and the high for the period being analyzed is called the upper shadow, sometimes referred to as an “upper wick” as well. The highest price paid for a particular period is the marked by the high of the upper shadow.

The price distance between the close and the low for the period being analyzed is called the lower shadow, sometimes referred to as a “lower wick”.

The real body displays the opening and closing price of the security being traded.

Depending on the price action for the period being analyzed a candlestick might not have a body or a wick.

To better highlight or visualize price movements, modern candlestick charts (especially those displayed digitally) often replace the black or white of the candlestick real body with colors such as red (for a lower closing) and blue or green (for a higher closing).

There are multiple forms of candlestick patterns; here is a brief overview of the most popular and widely used single and multi-bar patterns commonly used today.

Signals uptrend movement, they occur in different lengths; the longer the body, the more significant the price increase

Signals downtrend movement, they occur in different lengths; the longer the body, the more significant the price decrease.

The hammer is a bullish signal that occurs during a downtrend.

The lower shadow should be at least twice the length of the real-body.

Hammers have little or no upper shadow. When a hammer occurs during an uptrend it is known as a “hanging man” and is a bearish signal.

Because of the bullish long lower shadow however, this pattern needs bearish confirmation by a close under the hanging man’s real body.

This candle has a long upper shadow with little, or no lower shadow, and a small real body near the lows of the session that develops during or after and uptrend.

The Harami is a two-candlestick pattern in which a small real body forms within the prior session’s larger real body.

The Doji is a candlestick in which the session’s open and close are the same, or almost the same.

There are a few different varieties of Dojis, depending on where the opening and closing are in relation to the bar’s range.

The Dragonfly Doji has a long lower shadow, the open, high, and close are at or very near the session’s high.

The Gravestone Doji has a long upper shadow, the open, low, and close are at or very near the session’s low.

What are Japanese candlesticks?

This pattern often signals reversal of an uptrend.

This candle has a very long upper or lower shadow and a small real body. If the opening and closing price are the same the candle has no real body and is then called a Long-Legged Doji.

The first picture is a high wave candle the second is a Long-Legged Doji.

The bullish engulfing pattern consists of large white real body that engulfs a small black real body in a downtrend.

The bearish engulfing pattern occurs when the bears overwhelm the bulls and is reflected by a long black real body engulfing a small white real body in an uptrend.

My favorite price action setups consist of the pin bar, the inside bar, and my proprietary fakey setup.

What is a Japanese Candlestick?

Let’s take a look at some charts with examples of some of the various candlestick patterns converted into my price action setups.

Inside bars can technically encompass any candlestick pattern because they are simply a series of at least two candlesticks where the first candlestick completely engulfs the entire range of the subsequent candlestick, however, more often than not inside bars end up being spinning tops or dojis.

Note, the inside bar is different from the “engulfing pattern” because it includes the entire range of the bar, from high to low, where as the engulfing pattern only includes engulfment of the real body of the candle. I generally trade inside bars in the context of a strongly trending market as they are often great entry points into trends.

However, often times inside bars will occur at major market turning points as well as the previous trend loses momentum, pauses and forms an inside bar, and then changes direction.

My fakey setup is essentially a multi-bar pattern that consists of a false break from an inside bar pattern or a key level. The fakey can consist of a number of different candlestick patterns.

Often times the fakey setup will consist of a bullish or bearish engulfing pattern which is completely engulfing the range of a spinning top or doji candle which gives rise to a false break bar that can take the form of any of the candlesticks above that qualify as pin bars.

Candlestick charts offer a more vivid depiction of price action than what a standard bar chart can provide.

Where did Japanese candlesticks Come From?

Copyright  2012  www.LearnToTradeTheMarket.com (reproduction of this content without persmission is illegal)

Nial Fuller is a Professional Trader & Author who is considered ‘The Authority’ on Price Action Trading.

He has a monthly readership of 250,000+ traders and has taught 20,000+ students since 2008. In 2016, Nial won the Million Dollar Trader Competition. Checkout Nial's Professional Trading Course here.