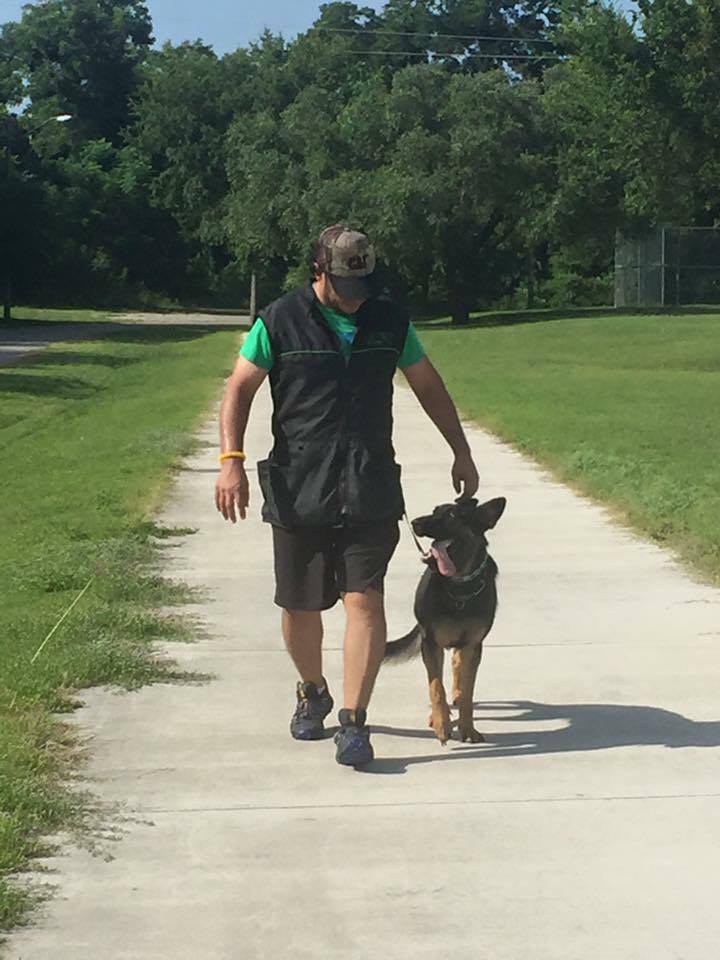 Mike Stone, founder of Absolute K-9, is proud of his success in earning a Schutzhund Title III with his female American Bulldog “Moxie,” the first of her breed to ever earn such distinction.

Read on to learn more about the Schutzhund and get a basic idea of the amount of work necessary to earn these advanced distinctions.

Developed in Germany in the early 1900s, Schutzhund (meaning protection dog) is a dog sport originally designed to develop and test whether German Shepherd Dogs possessed the traits necessary for service work, beyond simply evaluating a dog’s appearance.

While this sport has evolved in its methods and breed focus, it remains a rigorous and respected test of dog traits and abilities. Today, many breeds other than German Shepherds can compete in Schutzhund, but the test is extremely demanding for any dog and few are able to pass successfully.

Schutzhund Titles
While there are three Schutzhund titles a dog-handler team can earn, the pair must first pass the BH, which is a degree for traffic-safe companion dogs that proves mastery of basic formal obedience and the dog’s temperament as evidenced in a number of situations including exposure to crowds of people, strange noises, cars, other dogs, human handling, and more.

Once they have passed this test, they can compete for a Level 1 title.

To earn a Schutzhund I title, the dog must:

• Be at least 18 months old
• Pass a temperament test
• Heel on and off leash
• Demonstrate walking then sit, walking then down, stay, and a send-out
• Retrieve on the flat and over a hurdle
• Follow a track laid by its handler 20 minutes prior

There are also protection tests.

For Schutzhund Level II, the dog must:

• Be at least 19 months old
• Have its Schuthund Level I title
• Again pass all obedience and protection tests required by the level I, but these are made more challenging and necessitate a higher level of endurance, agility, and control
• They must also be able to follow a track laid by a stranger 30 minutes prior and
• Retrieve over a 6-foot slanted wall

To earn a Schutzhund III, the master’s degree, the dog must:

• Be at least 20 months old
• Have earned both the level I and II degrees
• Pass all obedience and protection tests off leash
• Demonstrate a walking and running stand
• Follow a track laid by a stranger 60 minutes prior, in which the track has four turns (twice that of the earlier tests) and three objects that must be found (compared to two in the earlier tests)

Furthermore, the dog must be the perfect picture of obedience, eagerness, confidence, strength, and ability.

In addition to these three titles, there are also additional training degrees for advanced tracking.

Mike Stone, founder of Absolute K-9, is proud of his success in earning a Schutzhund Title III with his female American Bulldog “Moxie,” the first of her breed to ever earn such distinction.

Any “Schutzhunder” will confirm that a high scoring Schutzhund III dog is the ultimate working dog: one in a thousand of all working dogs.

“Investing in professional canine training is the single most responsible thing you can do for your dog and your family.”

As Seen and Heard on…

Just because you want your dog to be well behaved doesn’t mean it needs to break the bank.

Absolute K-9 and Snug Pet Resort are the only dog training facility in San Diego to offer 0% financing for dog training. Taking advantage of our financing offer means that after the expense of purchasing a puppy or adopting a dog, you can immediately enroll them in training courses.