What is an Emerging Growth Company? by Jonathan C.

Under the Jumpstart Our Business Startups (“JOBS”) Act of 2012, a new category of issuer was created called an “emerging growth company” (“EGC”) for the initial public offering (“IPO”) on-ramp.

An EGC is an issuer whose initial public offering was or will be completed after December 8, 2011 and had a total annual gross revenues of less than $1 billion during the most recently completed fiscal year.

This new category of issuer was designed to ease the process of going public for companies that did not meet the conditional requirements listed below. The benefits of being an EGC are also discussed below but in order to understand the benefits it is important to know what, under the JOBS Act, can cause an EGC loses its status. On the earliest of the below four (4) conditions, an ECG can lose its status if:

1)      The last day of the first fiscal year of the issuer during which it had a total annual gross revenues of $1 billion or more. This is significantly difficult to do for most Over-the-Counter (“OTC”) quoted securities with little or no revenue, however, it can be accomplished especially if there is tremendous interest in the company.

2)      The last day of the fiscal year of the issuer following the fifth anniversary of the date of the issuer’s initial public offering.

Generally Applicable Questions on Title I of the JOBS Act

This condition is likely the catch all condition for any company that is or was an EGC; meaning that all companies, as long as they are still publicly traded, will qualify for this provision and thus loss their EGC status after five (5) years of being publicly traded. For example, if a company with a December 31 fiscal year-end completed its IPO on May 10, 2014, it would cease to be an emerging growth company by December 31, 2019.

It should be noted, however, that in general all non-convertible debt, whether publicly or privately issued, issued in the prior three years is counted toward the $1 billion limit, even if the debt is no longer outstanding as of the measuring date. It should be noted also that this measurement is done at the time of determining EGC status, not as of the end of the prior fiscal year.

In order to reach this status a public company must meet all of the following conditions as of the end of its fiscal year:

i. The company’s public float of its common equity was $700 million or more as of the last business day of its most recently completed second fiscal quarter.

The company has been subject to the reporting requirements of Section 13(a) or 15(d) of the Exchange Act for at least 12 calendar months.

iii. The company has previously filed at least one annual report to stockholders under Section 13(a) or 15(d) of the Exchange Act.

The company is not eligible to rely on the smaller reporting company requirements for its annual and quarterly reports.

There is no true benefit to being a large accelerated filer in and of itself.

It does mean that the company is doing extremely well and now has to make reports to the SEC in a more timely fashion than an ECG and has significantly more reporting requirements under federal securities law.

The above conditions are “or” conditions, thus an EGC only needs to fulfill one of the conditions in order to lose its status; it does not have to meet all of the above.

Who is Emerging Growth Company?

Since the JOBS Act took effect, a large number of the companies that have filed registration statements on Form S-1 have identified themselves as emerging growth companies and not just in the OTC Markets, both NASDAQ and New York Stock Exchange (“NYSE”) listed companies have all taken advantage of the EGC status.

EGCs make up a variety of industries, with pharmaceutical companies representing the largest group of EGC IPO issuers and the top five industries include pharmaceuticals, technology, real estate, energy, and healthcare. 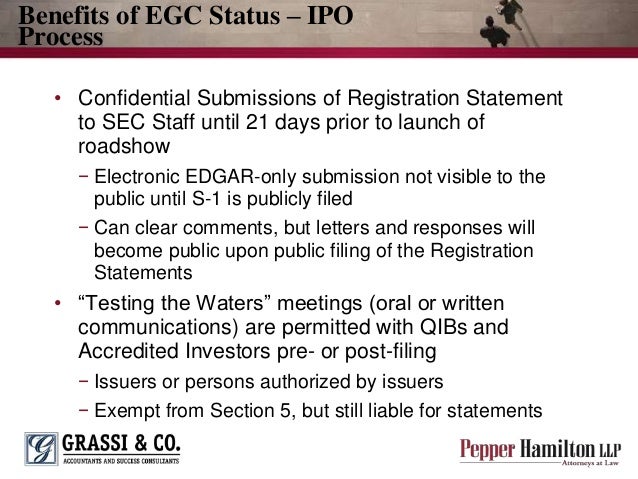 Wayfair, Inc. (NASDAQ: W), for example, filed its registration statement as an emerging growth company in the fourth quarter of 2014.

In fact, Wayfair posted a net loss of $63.2 million in the first half of 2014, compared with a loss of $24.3 million a year earlier, according to its prospectus and now Wayfair shares are valued at over $18.00 with a market capitalization of $1.78 billion at the time of this article.

In fact, the early results for EGC IPO companies have been impressive.

According to a recent Wall Street Journal article, nearly 20% of the ECGs that went public in 2013 started trading above their expected price range; as compared with about 10% for big company IPOs.

Emerging Growth Companies Will Start To Grow Up

Additionally, EGCs in their first three months of post-IPO trading, shares in companies with less than $1 billion in revenues gained 38% versus a 15% average gain from 2000 until the JOBS Act took effect, which also beat last year’s average three-month post-IPO gain of about 35% for bigger companies.

What do you have to do as an Emerging Growth Company?

As an EGC, the issuer does not have to disclose as much, as soon, or as long to investors.

This will be discussed in greater detail in the “Why Does it Matter?” section below. However, in order to benefit from the EGC status, the issuer must make affirmative disclosures related to its status as an EGC, in accordance with guidance from the SEC’s Division of Corporation Finance. Under this guidance, an EGC must identify themselves as an emerging growth company on the cover page of the prospectus and, additionally, the SEC requires each issuer included a risk factor describing the reporting obligations to which, as emerging growth companies, they are exempt under the JOBS Act and thoroughly describe the risk possibilities of the reduced reporting requirements that can make their common stock less attractive to investors.

Reporting companies that are EGCs may also want to consider including disclosure about how and when they may lose the EGC status and become subject to the standard disclosure requirements.

Why Does it Matter?

There are several important reasons why a company would want to be an EGC including submitting confidential draft registrations statements to the SEC, only needing to disclose their intention to list their shares twenty-one (21) days before they start their investor road show, only releasing just two (2) years of audited financial statements (non-EGCs must release three (3) years), and the need to only disclose the compensation for the top three (3) executives rather than the standard top five (5).

These provisions allow for young and inexperienced companies to test the waters of the market and allow for less time spent on the registration process and more time spent in the actual business operations of the company.

In fact, a studies estimate that 80% of EGC fillings utilize the confidential filing provisions and an estimated 90% of companies only release two (2) years of audited financial statements.

Along the disclosure lines, the SEC highly prefers the EGC disclose the follow provisions to potential investors because these provisions apply to all EGC and can affect the investment discussion of potential prospectus readers.

Specifically the following executive compensation provisions are unique to EGCs:

“Say-on-pay”: Under Dodd–Frank Wall Street Reform and Consumer Protection Act (“Dodd-Frank”) public companies are required to give shareholder the opportunity to cast an advisory vote, commonly referred to as a “say-on-pay” vote, as to whether or not they approve the company’s executive compensation practices.

However, under the JOBS Act, EGCs are exempted from this provision and thus do not have to ask shareholders if they approve of the executive compensation practices.

“Say-when”: Additionally, under Dodd-Frank, a public company must include a separate non-binding resolution as to determine whether shareholders “say-on-pay” vote should occur every one (1), two (2), or three (3) years.

Will My IPO Go Up? - Barita Brain Trust Bites

However, once again, the JOBS Act exempts EGCs from this provision because they do not vote on “say-on-pay.”

(Side note: a golden parachute is typically a form of executive compensation between a company and a high level executive that allows the executive to receive certain significant benefits including stock options and cash payments for salary upon the termination of the executive.)

It should be noted that “smaller reporting companies” are exempt from the say-on pay and the say-when vote but not the golden-parachute vote after January 21, 2013.

There are significant benefits from being declaring EGC status and thus allowing for the discussed benefits to be realized by the issuer.

These benefits extend well beyond the scope of this article and can be addressed specifically with a call to our office.

This securities law blog post about emerging growth companies is provided as a general informational service to clients and friends of Feinstein Law, PA and should not be construed as, and does not constitute, legal and compliance advice on any specific matter, nor does this message create an attorney-client relationship.

For more information concerning the rules and regulations affecting the going public direct transactions and direct public offerings please contact Feinstein Law, PA at (619) 990-7491 or by email at [email protected] or [email protected] Please note that the prior results discussed herein do not guarantee similar outcomes.