It is headquartered in Watertown, Massachusetts.

Bright Horizons Children's Centers, Inc. was founded in 1986 by Linda A.

Mason and Roger H. Brown.[2] Mason and Brown's Cambridge home was used as the company headquarters.

In 1987, the first two Bright Horizons child care centers were opened at the Prudential Center in Boston and at One Kendall Square in Cambridge, both on the same day.

After acquiring Cornerstone West, Bright Horizons expands to California in 1993.

Founders Roger Brown and Linda Mason were named “Entrepreneur of the Year” by Ernst & Young in 1996[3].

In 1997, the company conducts a successful IPO and goes public as BRHZ[4].

In 2000, the company moved its headquarters to Watertown, Massachusetts.

That year, London-based Nurseryworks and Dublin-based Circle of Friends become part of the Bright Horizons family, making it a global company.

In 2006, the Back-Up Care Advantage program was established[10] to provide in-home back-up child, and elder care.

In 2008, the company returned to its roots as a private company in partnership with Bain Capital[12].

In 2010, the company launched EdAssist, a tuition advisory service.

Bright Horizons bought out the Asquith Court Group in 2016 adding a further 100 nurseries to its care.

In 2000, Mary Ann Tocio was named President and Chief Operating Officer of BH.

She retired in July 2015 and remains on the Board of Directors. Today, the company’s internal training platform – Mary Ann Tocio University (MATU) – is named after her. 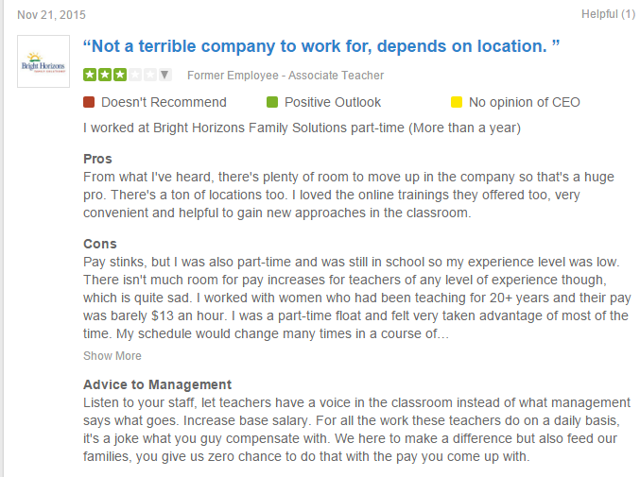 David Lissy served for 17 years as Chief Executive Officer beginning in 2002. He became Executive Chairman in January 2018. During his tenure as CEO, he was responsible for the company’s international expansion.[13]

Bright Horizons operates more than 1,000 child care centers worldwide, including more than 700 in the United States and Canada, more than 300 in the UK and Netherlands[14] and two in India.

In 1988, the Horizons Initiative was founded to serve the needs of homeless children throughout Greater Boston.

In 1999, the Bright Horizons Foundation for Children was formed.

Through the Foundation, Bright Horizons supports nonprofit organizations with a focus on programs for children and families. The Foundation is headquartered in Newton, Mass.