Non-invasive methods of inducing a miscarriage are now considered an effective alternative to surgical evacuation (dilatation and curettage).

This study aimed to evaluate the effectiveness of misoprostol in the termination of first-trimester miscarriages.

This prospective study was conducted between October 2009 and September 2010 and assessed all patients admitted to the Royal Hospital in Muscat, Oman, for the termination of first-trimester miscarriages during the study period.

All patients received misoprostol and the rates of successful termination were measured. Patient satisfaction was assessed using a short questionnaire.

A total of 290 women were included in the study.

The majority of patients experienced no side-effects due to misoprostol (89.66%). Pain was controlled with simple analgesics in 70.00% of the subjects. A high satisfaction rate (94.83%) with the misoprostol treatment was reported.

Misoprostol was a well-tolerated drug which reduced the rate of surgical evacuation among the study subjects.

This medication can therefore be used safely in the management of incomplete miscarriages.

Miscarriage is defined as a pregnancy that ends spontaneously before the fetus is viable.

The most common complication of early pregnancy is miscarriage; Robledo et al. estimated that approximately 8–20% of clinically recognised pregnancies under 20 gestational weeks end in miscarriage, with 80% occurring in the first 12 gestational weeks.1 Three options exist for managing a miscarriage in a patient: expectant management, surgical evacuation or medical/pharmaceutical management.

While surgical evacuation is a fast and effective procedure when performed by a well-trained physician, it is nevertheless a blind and invasive procedure that carries a risk of injury, bleeding and infection, in addition to possible complications from the anaesthesia.

Medical methods for the induction of miscarriage are now considered an effective alternative to surgical evacuation. Prostaglandin analogues, of which misoprostol is the most common, are widely utilised in several countries. In 2009, 40%, 72% and 76% of abortions were induced via medication in the UK, Sweden and Finland, respectively.2

Misoprostol is a synthetic prostaglandin E1 analogue which causes uterine contractions and softening and dilation of the cervix.

It has been used off-label in the management of miscarriage, postpartum haemorrhage, induction of labour and ripening of the cervix.3 Although misoprostol is not yet licensed by the Food and Drug Administration in the USA for the above indications, pregnancy was removed from the list of absolute contraindications to misoprostol use in 2002.4 The advantages of misoprostol include its low cost, long shelf life, lack of need for refrigeration and worldwide availability.3 The aim of this study was to evaluate the success of misoprostol as an agent for medical termination in first-trimester miscarriages at the Royal Hospital, Muscat, Oman.

This prospective study was conducted between October 2009 and September 2010 and included all patients admitted for the termination of a first-trimester miscarriage to the Gynaecology Ward at the Royal Hospital during the study period.

Is it necessary after a miscarriage?

The exclusion criteria were termination of a viable pregnancy and absolute contraindications for misoprostol, including patients with a suspected or confirmed ectopic pregnancy, gestational trophoblastic diseases, a high risk of uterine rupture, an intrauterine device in situ, an allergy to prostaglandins or haemodynamic instability.

Women who underwent a medical termination of pregnancy for maternal or fetal indications were excluded from the study and only those with a diagnosis of an incomplete or missed/silent miscarriage were included. All subjects underwent a thorough physical examination. Baseline characteristics, including age, parity, gestational age and type of miscarriage, were obtained. A complete blood count was performed to assess pre-treatment haemoglobin levels in all candidates, in addition to blood grouping.

All of the subjects were given misoprostol according to hospital protocol.

In such cases, the same dose was given orally. For patients with previous uterine scarring, a half dose of misoprostol was given. All of the subjects were admitted as inpatients to monitor bleeding and the development of any side-effects. Patients’ analgaesia requirements were also recorded.

All patients with Rhesus-negative blood were given an anti-D immunoglobulin injection before discharge.

The complete miscarriage rate was determined to assess the efficacy of misoprostol.

D&C Procedure After A Miscarriage

Complete miscarriages were defined as successful cases that did not require surgical evacuation after the administration of misoprostol. Ultrasonography was performed on each patient to confirm that no products of conception remained.

Diagnosis of a complete miscarriage was based on the clinical judgment of the attending obstetrician. However, an endometrial thickness of 14 mm was considered to be the cut-off value for a complete miscarriage. Retained products of conception indicated the need for a surgical evacuation. The time interval between the last dose of misoprostol and surgical evacuation was also assessed. Following the completion of their treatment with misoprostol, patient satisfaction was determined using a short questionnaire.

Responses to the following two questions were recorded: “Are you satisfied with the treatment?” and “If you have a similar problem in the future, are you going to use misoprostol again?”.

All patients gave informed verbal consent prior to their inclusion in the study.

A total of 290 women with first-trimester miscarriages were admitted to the Royal Hospital during the study period. The mean age was 32.9 years and mean parity was 2.6. 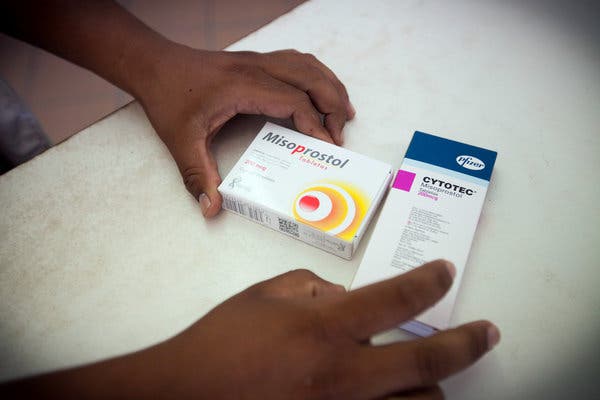 The overall rate of complete termination with misoprostol was 61.38%, while 38.62% of cases required further surgical evacuation.

Early surgical evacuations (within 24 hours of the last dose of misoprostol) were performed for 65.18% of the subjects.

After excluding cases with bleeding and suspected infection, 44.64% of the women who underwent a surgical evacuation due to failed termination did so within 24 hours of receiving their last dose of misoprostol. Only 10.71% of the patients underwent surgical evacuation after 72 hours [Figure 4].

All patients with significant bleeding based on the subjective assessment of the attending doctor underwent surgical evacuation. All of the febrile women had fevers which subsided within 24 hours.

None of the patients experienced any gastrointestinal side-effects. Only one patient experienced prolonged bleeding lasting for four weeks after management with misoprostol; she underwent a surgical evacuation and subsequent histopathology showed only blood clots with no retained products of conception.

Analgaesics were offered to all of the patients, but the majority tolerated the pain well.

Pain was controlled with paracetamol and non-steroidal anti-inflammatory drugs (NSAIDs) such as mefenamic acid, diclofenac sodium tablets or intramuscular injections in 70.00% of patients.

Of the remaining patients, 26.55% did not require analgesia, while 3.45% received tramadol due to NSAID allergies.

Of the 13 patients who were not satisfied with misoprostol, two nevertheless stated that they would try it again in the future in order to avoid the potential complications of a surgical evacuation [Table 1].

Open in a separate window

During their reproductive years, 25.00% of all women will experience at least one early pregnancy miscarriage.1 Suction evacuation is the usual treatment for miscarriage, regardless of gestational age.

In three small randomised controlled trials, expectant management showed a success rate of 79.00% in three days for incomplete miscarriages and only 37.00% in seven days for silent miscarriages.5 There were no differences in complication rates.5

Studies have suggested that pregnancy termination efficacy may be higher among early pregnancies (six gestational weeks).

Faúndes et al. determined that the rate of effectiveness for misoprostol in first-trimester pregnancy terminations was 85.00%.6 Davis et al. also reported a success rate of 85.00% for misoprostol.7 However, they noted that post-treatment bleeding occurred for longer periods of time with misoprostol, although none of the patients required a blood transfusion.7 The duration of post-treatment bleeding was difficult to assess in the current study as most cases were straightforward and were therefore followed-up by local general practitioners outside of the Royal Hospital.

Chen et al. reported that nearly 30.00% of deliveries in the USA were performed via Caesarean section;8 it is therefore not surprising that many women who suffer from miscarriages also have a history of uterine surgery. Misoprostol may be a preferable option for these patients.

In the present study, there were no cases of uterine rupture or adverse outcomes.

Misoprostol can be administered at different doses and through different routes (vaginal, oral, sublingual or rectal).

A Cochrane review of 19 randomised controlled trials indicated that the vaginal route is the best option, with no significant difference in side-effects.9 Vaginal misoprostol administration results in slower absorption of the drug and longer duration of stimulation in comparison to oral administration. The sublingual route avoids the first-pass effect and is associated with more rapid absorption and higher peak levels than those obtained with other routes.9 Misoprostol is usually administered vaginally in three doses of 800 µg each; this regimen has been found to yield a success rate of 90.00% in the first trimester, with 80.00% and 95.00% of patients expelling the products of conception within 24 and 48 hours of the dose, respectively.5 The same treatment plan was used in the current study but had lower success rates due to early intervention with surgical evacuation.

While sublingual misoprostol has a similar efficacy to vaginal misoprostol, Gemzell-Danielsson et al. observed that this route was associated with more frequent side-effects (e.g. diarrhoea).10

Different factors may have influenced the decision for surgical evacuation in the current study. Importantly, misoprostol was restricted to inpatient use only and there was pressure from both the patients and hospital administration to shorten hospital stays, increase patient turnover and reduced patient overflow and bed shortages.

Early interventions in first trimester miscarriages could be minimised by the initiation of misoprostol as an outpatient treatment. Additionally, delaying the assessment of misoprostol efficacy until a week after the last dose is recommended. However, more studies on this topic are needed.

Side-effects of misoprostol are usually transient and self-limiting. The most commonly reported side-effect is vaginal bleeding, which can last for 2–6 weeks. Faúndes et al.

Abdominal cramping beginning as early as 30 minutes after administration of the drug is another common side-effect of misoprostol.6 For this reason, most patients in the present study were given analgesics and NSAIDs concurrently with misoprostol.

There is no consensus regarding the use of antibiotics during treatment of miscarriage.

Patient satisfaction is a useful measure to determine the efficacy of any treatment and assess the quality of healthcare provision.

Ideally, patients should be surveyed regarding a wide range of factors associated with their treatment, including inpatient care, experience with misoprostol, route of misoprostol administration, type of analgesia received and patient-provider relationship.

The current study is also limited as a more precise satisfaction rate could have been determined by analysing women who had had previous surgical evacuations and comparing them with women receiving pharmaceutical treatment for a current miscarriage.

Misoprostol was an effective treatment for the management of first-trimester miscarriages in the studied group.

The administration of misoprostol significantly reduced the surgical evacuation rate with minimal side-effects. Subjects reported high rates of satisfaction and acceptance with misoprostol. Therefore, misoprostol is recommended as a safe drug for use among outpatients with incomplete miscarriages as an alternative to surgical evacuation.

The authors declare no conflicts of interest.

6. Faúndes A, Fiala C, Tang OS, Velasco A. Misoprostol for the termination of pregnancy up to 12 completed weeks of pregnancy.