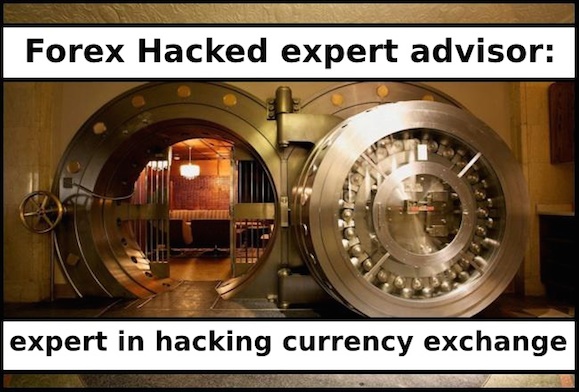 Judging by the words of the author, this EA claims to be perhaps the best expert advisor using Martingale. The name speaks for itself, Forex Hacked expert advisor offers the key to the foreign exchange market.

This trading robot is freely available. And it is important not to make a mistake – there are 2 types of EA: simple hacker and expert advisor with the “pro” prefix: the main difference between the versions is in the operating currency pairs.

The basic version is designed exclusively to trade only on GBP/USD pair (working timeframe h1), stable trading was not achieved on the other pairs.

The Pro version differs with multicurrency, selected settings allow to trade on 8 currency pairs. In addition, the algorithm of the expert advisor was redesigned a little – as a result, the EA trades intensively and does not overhold positions.

As for the algorithm of operation and the tools used for the analysis of the market, there is no such data. The only thing that is known is that a modified version of the “hacker” combines algorithms for 3 scalping strategies.

How to set up Forex Hacked expert advisor

The settings of the EA are quite diverse, the trader has the ability to configure settings such as: 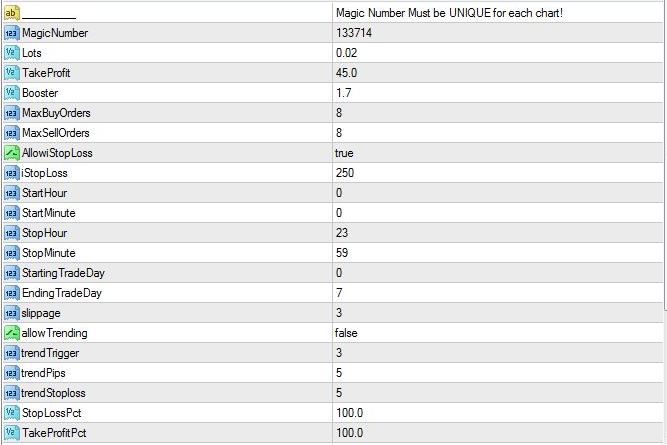 As for the Pro version of the expert advisor, the specified list of options is added with a block of settings for each of the 3 strategies used.

In addition, the opportunity to optimize trading during the flat was added, defined by the TurboMode parameter.

Testing of the expert advisor

Forex Hacked expert advisor in its basic version is not able to ensure lucrative trading for a long period of time.

During this time period, the expert advisor failed to increase the deposit, as well as to save it. The deposit was siphoned off in early September. At that, most of the time the deposit was relatively stably growing, the main loss was obtained at 2 strong trends, so that this trading robot is not devoid of the main deficiency of Martingale – vulnerability to strong movements.

With an increase in the deposit several times, the basic version of the EA behaves somewhat better, and at testing for several years even shows a good profit.

But to do so, the deposit should be 3-4 times higher than the minimum recommended.

As for the updated version of the EA, the test results show that the algorithm of the expert advisor has really been redesigned. Most of the time the Forex Hacked expert advisor was trading profitably, and the failure in trading occurred only at the beginning of September – during a wave of large-scale dollar strengthening.

Results of trading on other currency pairs

The main feature of the modified trading robot is ability to trade on the most popular pairs.

The main difficulty of multicurrency trading is selection of optimal settings for each specific pair. Therefore, the expert advisor is supplied in bundle with the configuration files for each currency pair.

Trading results are highly dependent on the chosen currency pair.

But the big divergence between the equity line and the balance suggests that the EA was simply waiting over the unprofitable price movement – no novelty appeared in this regard.

The result for the EUR/CHF pair was approximately 3 times worse than on EUR/USD. Profit for 4 years of testing was $30,126.92.

The result for other currency pairs (AUD/USD, EUR/JPY, EUR/GBP, USD/CAD, USD/CHF, USD/JPY) was approximately the same. But trading simultaneously with 8 pairs will require significant capital, so it is recommended not to use more than 2-3 pairs in trading.

It is safe to say that Forex Hacked expert advisor in the basic version is hardly worth using.

No Longer For Sale!

Despite the good results in the past, now it is not able to trade consistently. An enhanced version looks much more interesting.

After modification, the expert advisor allows trading with several currency pairs. Importantly, despite significant drawdown on each of the currency pairs, they do not coincide in time.

Therefore, trader, working on multiple pairs, can diversify risks, the probability of large drawdowns on 2-3 or more currency pairs at the same time is unlikely.

But even in this case it is likely that resources will not be enough for waiting over the trend movement.

In general, attention should be paid to the enhanced version of the EA only.

Despite the fact that trading can be conducted simultaneously on 8 currency pairs, it is recommended to opt for 2-3, it will serve as an additional hedging from the siphon-off. Also do not forget that Forex Hacked expert advisor is still a Martingale robot, and thus siphon-off of the deposit is only a matter of time.

Therefore, it is necessary to take profit from time to time.